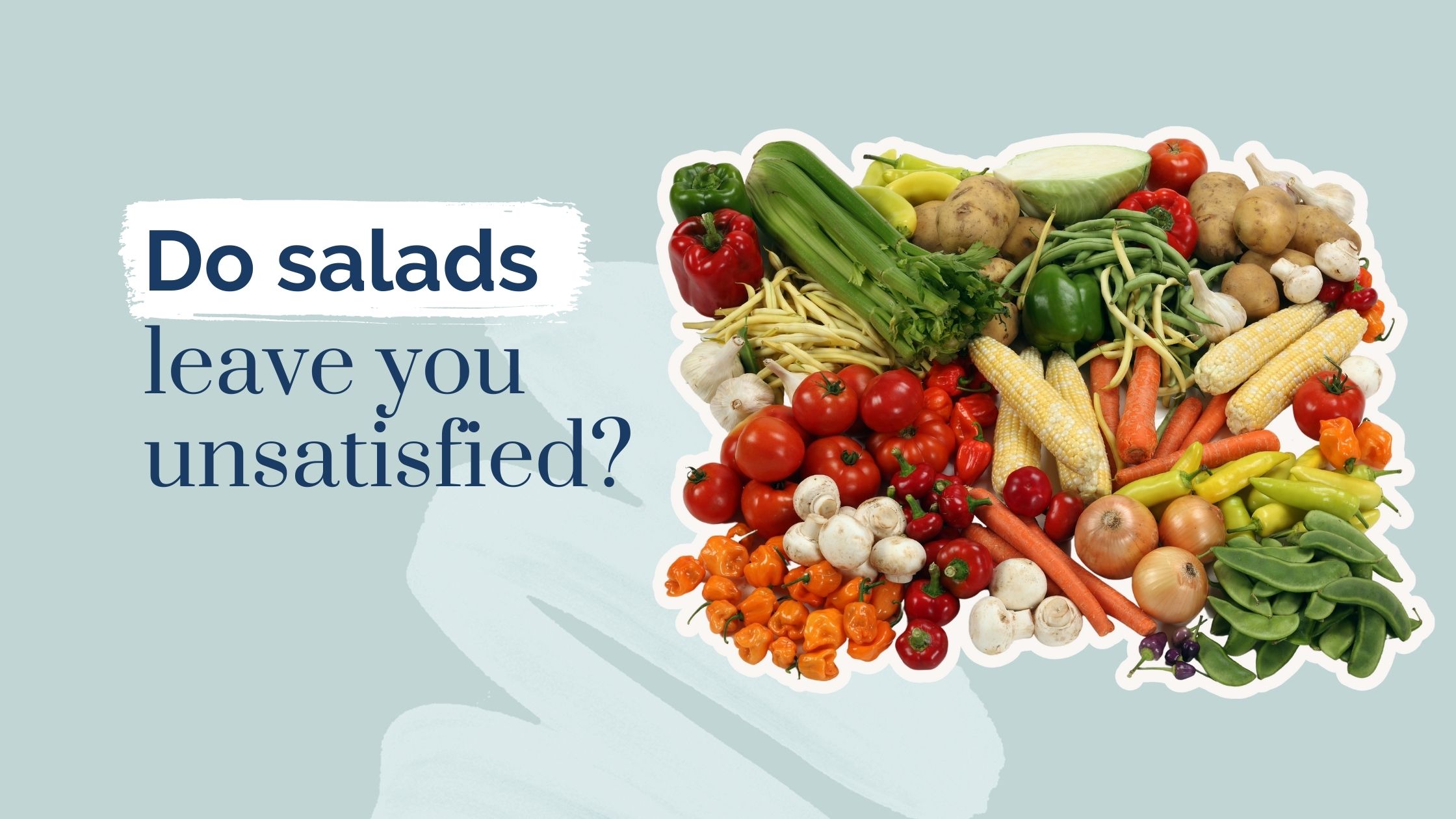 Why don’t I feel full after eating vegetables?

What to do when salads leave you less-than-satisfied.

Find yourself hungry after a salad at lunch? Keep asking Why don’t I feel full after eating vegetables?

Why does this even matter?

You’ve just tucked into a big salad, filled with leafy greens and all that good stuff.  You’re feeling like a #healthgoddess and just a little bit proud of your virtuous lunch option.

But half an hour later, you feel that familiar gurgle in your tummy, followed by a growl that could rival the lion in the MGM opening credits.

Yep, you’re still freakin’ hungry, so you find yourself feverishly searching for a snack that will hold you over until dinner.

You’re not alone, or crazy. Because there’s actually a good reason that plain ol’ vegetables on their own don’t leave you feeling satisfied.

Why vegetables just ain’t that filling

Most veggies are high in fibre, so theoretically they should leave you feeling full. But here’s the thing: feeling full isn’t just a matter of stretching your stomach.

Satiety is a complex system that involves both your mind and your gut. Vegetables aren’t very calorie-dense and are made up of mainly air and water. So, by the time you chew it all up, there’s really not a lot of volume entering your stomach. Plus, it generally doesn’t send the signal to your brain that you’re full, which is why you’re left feeling like you want to bite off your own arm half an hour later.

The good news is, by adding in what I like to call ‘sanity ingredients’ into your salad,  you can transform your salads into a filling meal that satisfies – and stop asking Why don’t I feel full after eating vegetables?

How to make your salads more filling

Adding some crunchy elements not only means your body has to work slightly harder to digest it (a good thing in this situation), it also makes your meal waaaaaay more interesting to eat.

Because, who wants to eat a soggy pile of spinach with no discernable texture? Not me!

Some great ways you can add some crunch to your salad include adding crushed up nuts like almonds and walnuts, pinenuts, roasted cauliflower or crispy rice noodles. You could even add in some coconut bacon, which is like a vegan (and healthier for your arteries) version of the real deal.

Starchy vegetables like pumpkin, butternut squash and parsnips tend to be a bit higher in carbs and more dense than leafy greens. Try roasting some of these veggies in the oven and popping them into your salad — not only will they keep you full for longer, but they’re also freakin’ delicious. You can also add other yummy carbs like rice, quinoa or barley.

Adding a small amount of healthy, unsaturated fat to your meal will slow down the rate at which your stomach empties during digestion. It also helps with the release of the hormones that control your appetite. Try adding some olive oil, avocado, or even some cheese like goats cheese or feta throughout your salad, and notice how much more satisfied you feel.

The same goes for when you’re cooking your veggies at home. Don’t be afraid to cover them in a generous amount of olive oil, coconut oil or ghee when you’re BBQing or grilling. However, try to keep deep-frying to the rare occasion, as this isn’t great for your heart health.

When it comes to eating veggies, don’t sweat the small stuff. After all, you’re eating a salad for crying out loud — adding some salad dressing or some fun elements for texture isn’t going to hurt you. In fact, you’ll actually be doing yourself a favour as it will keep you feel satisfied and satiated for way longer.

Try my App Back to Basics for FREE for 7 days Self-care: Why I'm OK with not being liked